The main objective of the project ‘Specific features and similarities between the German-speaking space and the Balkan one’ is the distinction of different cultural and civilization realities often deformed by different psychoses that have dominated the European society. The relations between the German world and the Balkan one are ancient, solid and prolific. They require a better knowledge / understanding for both sides especially now, when the issue of preserving or reconfiguring the European identity becomes extremely delicate and insecure, perhaps also because the solutions are subject to visions that, in reality, treat written culture as a museum object, not an alive an essential on the long run one. ‘In the current era – that can also be called the era of the multilateral war of the hormone against the neuron and the body against the book – written culture, primarily literature, seems to have lost the purpose and power to choose and protect essences that deserve not to be forgotten, which teaches the human being how not to get out of their own system of signs. Freedom of expression, based on human rights, extends to the surface and loses its depth, ruining the quality of life, or at least by keeping it within the limits of survival and biological well-being.’* The process of becoming superficial (“superficialisation”), imposed by the search at all costs for material comfort to the detriment of culture and, implicitly, of the quality of life, expands illiteracy / lack of culture and illiteracy / lack of culture gradually imposes the uniformity of the human species. From this point of view, this work is also an approach to counteract the ignorance and spiritual illiteracy, especially in the conditions in which the studies dedicated to this subject are either too “academic”, of niche, or too simplistic, touristic, and do not help neither writers nor teachers, cultural diplomas or readers with pretensions of authentic intellectuals.

The work aims to reveal the communions and specific elements of the German-speaking and Balkan spaces under the prism of written culture. Interdisciplinary in its essence and structure, the work uses verifiable scientific information and elements from: literature, comparatism, imagology, intercultural communication, aesthetics, sociology, mysticism, theology, anthropology, theatre, folklore, cinematography, discussing perennial topics in European life (open to scientific debate) based on fundamental works created in the two studied spaces, such as: modus vivendi and modus moriendi, popular creation / folk art, body-soul and creature-Creator relationship, the role of exile and national minorities, multiculturalism, literary styles, literature in the global era, mysticism, the complex East-West relationship, the impact of the studied phenomena on mentality and life, cultural and civilization exchanges, etc.
The Project

Email ThisBlogThis!Share to TwitterShare to FacebookShare to Pinterest
Labels: "Specific features and similarities between the German-speaking space and the Balkan one", Prof.univ.dr. Ardian Kyçyku, Studies

About literature and bilingualism

Iolanda Malamen: Ardian-Christian Kuciuk, God has given you a second literary homeland: Romania. So, as it could be said, “the sweet burden” of two languages in which you can write different things. I find that fascinating.

Ardian-Christian Kuciuk: I must say that these two homelands, in time, became more textual than literary. For me, the fascination lies more for the gift required to maintain a real equilibrium between the sweetness of the burden and burden of the sweetness.

- You have reinvented yourself in a new culture. Was that, though, a trauma?

- It was more than a reinvention, it was like climbing a mountain backwards. Before writing directly in Romanian “The year in which the swan was invented” in the graceful year of 1996, for instance, I believed that I would not write in another language except Albanian, ever again. Maybe it was a trauma for the other, although my behavior had no stains of abnormality. It was the natural rise of a literary opera to the level at which you can produce global literature, along with the more local the languages that you write in become.
Read more »

‘The father was so pure, that you sometimes felt like killing him’ – this is one of the key phrases of this novel written in the Albanian language, in Bucharest (2003). A sexagenarian father, his wife and their only son withstand a history where the dictatorship of an ideology has become a dictatorship against destiny, the dictatorship of destiny against the individual and (secretly) the dictatorship of each man against all. ‘When the ideologies only lead to utopias – often being transformed into multiple massacres – in such a way that man is satisfied with little and pleased with nothing, The Father has helped me see well-known things, but never written, and written things, but unknown on a profound level. For often, where life seems unbearable, the intensity of feelings, of questions lacking an answer, is a kind of miracle’ the author said. 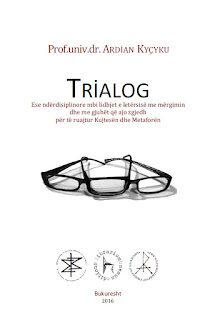